If you have any questions regarding your flight, please click on the link below. 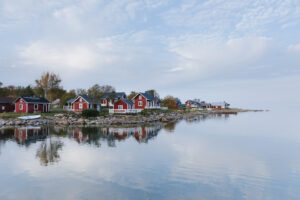 During the spring, work has been intensive within the FAIR electric aviation project and especially between Skellefteå Airport (SFT) and Kokkola-Jakobstad Airport (KOK) to establish a new scheduled airline.

On Thursday 9 June, the actors gathered at both airports to hold two press conferences for the purpose and to announce the new cooperation, the background to the cooperation and to publish the timetables for the regular and direct routes between Kokkola-Jakobstad, Skellefteå and Umeå.

The lines are operated from 15. August this year, with two routes per week, on Mondays and Tuesdays. The routes will initially be flown with a plane that takes nineteen passengers.

– With this measure, we take a concrete step in order to prepare the region for electric flights. In the beginning, we will offer fossil-free fuel for those who want to reduce their climate. From 2024, it is expected to be able to switch completely to biofuel. A few years later, we hope to be able to start operating the route by electric plane. Preparing the region for electric aviation in this way is one of the measures that the electric aviation project FAIR advocates, says Robert Lindberg , CEO, Skellefteå Airport.

The FAIR electric aviation project has carried out extensive investigations in the area. One thing that stands out is that you have to build up demand over a longer period of time in order to have the viability of an airline. A completed line is seen as one of the important preparations before the electric flights are on the market. The electric flights for regional routes will be on the market within 5 years.

– Measures are needed today with a view to the future. There is already a lot of cooperation between the regions and a need to further improve the east-west relations. In addition, the Kvarken region and the Nordic region are at the center of a huge change with historically large investments in industry. This leads to greater demand for accessibility for both companies, employees and the region’s residents. A functioning regional electric aviation network can help meet some of this demand, describes Evelina Fahlesson (S), municipal councilor, Skellefteå municipality.

The benefits to society, the green transition in order to reduce CO2 emissions and to reduce the world’s dependence on fossil fuels and the profit in travel time are driving and are seen as the great benefits. The geopolitical situation in the world has made the ambition even more acute.

– Biofuel, for example, is important in the short term, until electric aviation is on the market, both based on reduced CO2 emissions, but also to build up demand and thus production of biofuels, adds Robert Lindberg .

Peter Boström (SFP), Chairman of the Board of the Jakobstad Region Development Company Concordia and board member of the Kvarken Council EGTS calls on the region’s actors;

– It is important that municipalities, regions, development companies, universities, business and the like make sure to use the route. Partly to further increase cooperation and to give the airline a long-term viability. But also so that we can evaluate the electrified short-line network of the future, which we believe the Kvarken region is in great need of,

– This investment also strengthens the regional branding. We want to see our region as a pioneering region where we not only talk about the green transition, but we also have both the industry that manufactures and develops products and goods in the area and also uses and applies the region’s actors in practice, says Mathias Lindström , director, Kvarkenrådet EGTS and the project FAIR’s representative and adds;

– We already have the world’s most environmentally friendly ferry that is both gas and battery powered and that uses locally developed technology – soon also the first biofuel flight and later a border regional electric flight that connects the Nordic battery belt.

The airline Jonair will start up the route. In realization, the regional airports are important;

Without regional airports, it is impossible to improve accessibility. Closing down small and smaller airports today would be counterproductive when we see in front of us that electric aviation will revolutionize flying and when new flight patterns will be created. This is because electric aviation shows a great possible societal benefit in the form of travel time gains and reduced CO2 emissions, says Stig-Göran Forsman , CEO, FAB Kronoby Flyghangar.

Prices from SEK 495 single ticket
Trips can be booked at www.jonair.se

FAIR is a first step towards a rapid implementation of sustainable aviation in the Kvarken region in Sweden and Finland and Helgeland in Norway. The project raises knowledge about electric aviation, investigates the possibilities and maps both needs and the technical investments needed.